Good intentions
Once a good and wise man, the clan's alchemist had a peaceful live. Up until the great betrayal that changed this.
His friends pretended he didn't exist. His family wrote off his name. Even his wife would deny to see him.
Why? Because he started to study the clan's most sacred potions, and was finding all sort of other uses for the holy drinks, used by his people to connect with their God.
He was deemed a heretic and soon enough, exiled from the clan homeland.

All he wanted was to understand their traditions. Instead, he became a pariah.

It took a year. A full year. A life of contemplation, of study had turned sour. The once wise man lost his mind and now only wicked intentions lied within. He returns to his clan lands as a hooded figure. As a fast talking medicine man. He starts with the sick, selling off a "miracle medicine", a false hope.
Soon enough, he wins the trust of some of the clan members and before they can know it, their water supply gets filled with said "Miracle Medicine". They all die. With the exception of the newborns.

The hooded man took care of the children of the clan. He was now a jaded, foolish individual. He passed down the teaching that the sacred potions were anathema, they are not supposed to be understood only to be consumed in communion with God. His clan was now slowly but surely being reborn. Up until a young and wise man started to question how said Potion works... 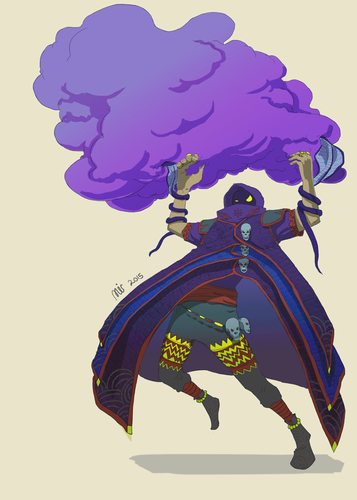 He was once a good and wise man, but he was betrayed by his clan. He returned to his clan for revenge after practicing for a year.