Warforged.
The alias given to the golems animated through magic and science to fight wars in the name of wizards. They shape their bodies and give them minds, for War is an act created by people, with all the complication that comes with this fact.

This particular warrior had no name.
He was yet another Warforged, to be at the front line of a frontier conflict. He killed others like him, he spilled the blood of Elves, Orcs, Humans, Goblins... You name it, he probably killed it. No remorse for all his cause was War.

Once the wars were over, the wizard freed his Warforged contingent. They were now free to do whatever they wanted.

Except...They were bred for war, by war. It was all they knew.

No name traveled the world, looking for meaning. His lance and sharp helmet gave him a striking look. He often embarked in all shorts of adventures and conflicts, always been paid by others.

It was in his nature to fight.
So he hoped that in fighting, he would understand what was his purpose.

"The Wandering Warrior" was the nickname he settled when he introduced himself to others. That was all that was needed to be said about him after all. 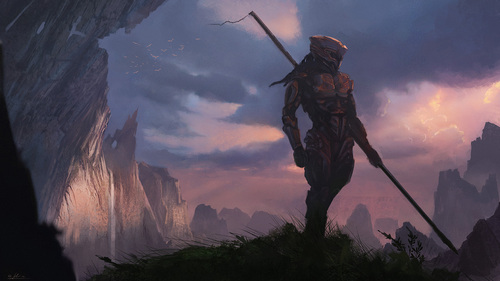 personal work in between work and school