So, my daughter turned into a male cloud giant.

I know, I know it sounds crazy.

That the little girl you see playing with sticks and pebbles in the corner tore out the valley we're now sitting in, but believe you me, she did. Well, he did. It is rather confusing to think about. But you've told me a fair share of your own tales so I figure you deserve the best. So, here goes.


I've not always been a bartender, aye there was a day when I might have been more likely to smash a goblet over the brow of a man your size than give him a tall cool one. I fancied myself an adventurer, a bounty hunter is more along the lines of who I was.


Anyways, I get called in by some small-time village out twenty miles south of here (you need a refill? No?). The cheiftain, little bald man with a staff, old druid of a man, asked me to investigate the crypt of some giant-worshipping-necromancer he'd seen recently(I know, giant-worshipping necromancer. Makes no sense, but that's magic users for you). Apparently this crazy-ass guy had built himself a big'ol crypt, and then when it was done he buried himself in it and waited to die. He had a couple of magic necklaces, and he figured one of them would revive him as a lich like the old stories. 'cept this necromancer wasn't all that good see, and raised himself as a normal run-of-the-hill zombie. But, what this guy didn't know was that his old belt (yep, look up above my fireplace, the old guy's stll there) was actually an ancient cursed gift from the giant-folk of old to our ancestors in Pronon City long time'ago. It needed one bit of strange magic to get the curse ta' work: the flesh of a zombie.


When I worked my way in the crypt, sidestepping the couple'a traps dummy had laid out before shoveling himself to death, I found the ol'boy tripping over his old staff and books. I couldn't help but laugh, and that brought his attention. I slew him there in the crypt and laid him back in the hole he climbed out of. But not before I took the amulet of his neck and the belt off his waist. I tell you, I've seen some sights, but a zombie with its pants 'round its ankles is one of the funniest things I've ever seen.

Anyway, so I take home the gear and have it on the table ready to go off to the city ta' sell. In strolls my pride and joy, wee Angelina. She says to me in that sweet northern voice'a hers. "Daddy, can't I have one of these cute little necklaces? Just one?" She fawns the eyes (here, let me get you another tankard), she gives a curtsie and I say no a'course. No cute look from no little girl will make me give her treasure taken from a zombified necromancer. But, then I made the mistake all young parents make.

I walked about of the room. Little girl threw on the necklaces, and the belt she put over her tiny little waist. Just as I walked in and got ready to give the whoopin' of a lifetime, she started glowing. My baby girl, hair gold as gold is gold, starting givin' off the sort of aura that spellcasters give when you know bad things is 'bout ta' happen. I run at her, but I can't get a hold of any of the gear before she right polymorph's into a cloud giant. She grew right up and tore a'hole through my house (look, up there in the left. See the patching? I couldn't afford Nobby, regret it too winds still sneak in sometimes). Suddenly there I was, armor and sword in hand, fighting my wi-lass. My own flesh and blood! Eventually I smarted up enough to cut the belt off and then she went right back down to her lovely, though strangely smelly, self. So, I went and had a'couple'a clerics de-curse (or whatever you call it, I'm not much'a fan o' magic if you can't tell) the belt and then I hung it up on the wall. Angelina doesn't remember a lick of what happened, I suppose I might tell her when she's older.

Anyway, you been listenin' to an old man's tale for too long now, how's about'a nother mead? 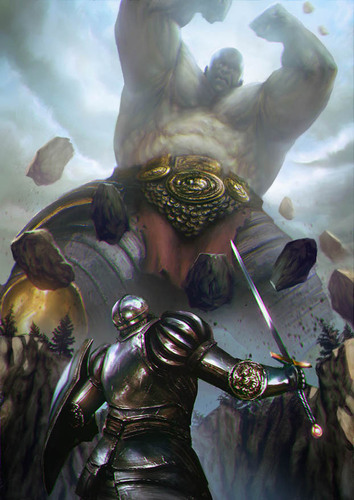