The Obelisks should have saved us.

Joshr perched on the boulder, waves crashing against the rocky shore at his back. The Obelisk rose from the volcanic rock like a charred tree from ash. Its protective enchantments still held. The runes running up its hundred-foot spine still glowed blue. Far to the west and east, other Obelisks shone, each holding their ancient vigil.

No enemy could breach the unseen wall spanning between the Obelisks. But the Builders never knew enemies could come from above.

Joshr ran his thumb around the smoothed knobs of his ironwood staff, wishing he could forever stall the dreaded moment. But the longer Joshr waited, the more souls death took. Inaction made him more a murderer than the Men of Blades.

The staff’s metallic cap scraped stone as Joshr traveled the slippery path down the rocks. His sandal slid down a boulder face. Joshr stabbed his staff into a crevice to stop his fall, and a crab scuttled from its lair, snapping his direction then fleeing.

For century the Obelisks separated the Builders’ children from the Men of Blades. Those fighting to protect their families entered the Obelisks’ fortress unharmed.

But the bloodthirsty could not.

The vicious rotted as they entered the Obelisk’s Keep, their skin falling loose, eyeballs shriveling, their bones crumbling to dust. During the height of the war, squawking buzzards lined the invisible barrier, gorging on remorseless killers who dared to try the Builders’ enchantments.

The Men of Blades died long ago, the records told. But history hides secret from even the wise. Not all died. Many fled to the stars in silver dragons. The Builders’ descendants never knew until the sliver dragons returned, flames bursting from their snouts.

Joshr’s staff found the hidden door at the Obelisk’s base, drawn like a magnet to ore. A hiss of the ancient passwords and the obsidian wall folded back. He rapped his staff along the inner walls until trapped starlight streamed from its tip. The starlight filled the tower, casting shadows among the maze of gears crammed behind the Obelisk’s translucent surface. Joshr paused a moment, listening to the seagulls and breathing in the salt air.

He ascended the spiral staircase.

Joshr should have acted sooner, but he’d hoped he could save them all. This generation had never known war. But the Men of Blades never forgot. When they attacked, the Builders’ children had three choices—chains, the sword, or the grave.

The Obelisks never cared whether you carried sword or sickle. They only condemned those who let their souls darken. But by the time Joshr found the Obelisks’ final password, too many of his people had let violence travel from their hands to their hearts. Slaying the Men of Blades was no longer a battle of defense, but revenge.

Joshr warned them. He pled with them. But they ignored him.

They had dragon riders to slay.

The obsidian steps butted into the wall. As he mounted the next to final stair, Joshr hunched to avoid knocking his head. His heels hung off the edge.

A dial clung to the Obelisk’s inner wall, pointing at a single vertical line etched into the glassy stone. Opposite it, someone had carved a burst of lines streaking from a central point, like a toddler’s doodle of the sun.

The Builders had more foresight than their children realized. Yes, the Obelisks shielded against the outward enemy. But they could also strike the enemies within.

Joshr’s aged bones crackled and pinched as he stretched out his hand. If only more had heeded his warning.

They could have survived tonight.

But he couldn’t let the remaining innocents suffer any longer. Joshr turned the dial. 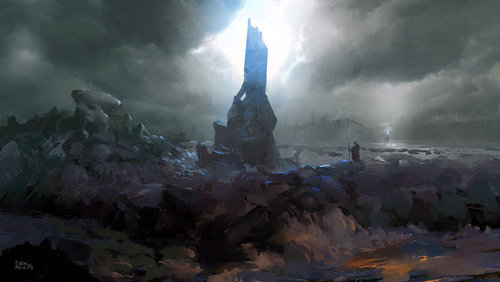