Another night in the Underdark

The priestess of Lloth sat quietly at the temple gates of her beloved spider god. Her eyes closed, turned inwards in a deep meditation. The political crisis eating away the noble caste of Menzoberanzan, the dregs of drow society were booming with opportunity. .

This meditation wasn't about self control or enlightenment, it was a trance of hate. A hate the priestess canalized towards a way of exploiting the situation in her city for her personal gain. As expected of one of Lloth worshippers.

As the dark elf canalized her dark feelings toward this 'opportunity', a group of goblin marauders slowly approached her. This particular group of Goblins was recently relocated from a smaller cave, in search of food and soft targets. They just found Menzoberanzan, and that one dark elf was the first time they saw a Drow in their short, pathetic lives. Their feeble minds recalled an encounter to a pacific Elf on one of their pillage runs, inside the heart of a bustling surface city. Killing and pillaging the Elf corpse was easy for the goblins.

So the first feeling the band of marauders had once the eyes of the priestess focused on them was of satisfaction that dinner that night would come easily.

Utters the Dark Elf as she rises from her meditation spot. And sure enough, arms created of arcane energy start materializing around her. This takes the goblin group back. They just stood there, in a mix of surprise and fear. Just who was this elf? And what she was doing?

She whisper the pair of words with hate. A hate directed at the pettiness of the ruling class of her own city, but aimed at the goblins none the less. As she does so, she makes an arcane gesture with her fingers, signalizing the death that was to come.

And sure enough, it came. In a moment, the whole goblin party vomited their souls out of their eyes and mouth, dead where they stood.

Shaking her head, the priestess of Lloth enters the temple, irritated for losing her focus. This would be a long night in the cult. At least she already vaporized someone that day. 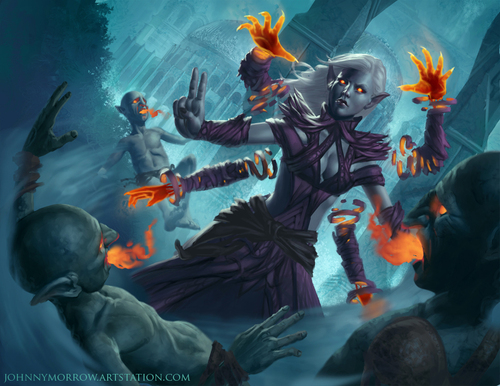