From the snowy hills of the Frozen Empire of the Bear hails the lonely hero called Alekzander Protokiev, also know from our readers as 'The Necromancer'. He doesn't receive much fan letters, but he is known throughout the realms. So much so, Alekzander reports that most inns won't let him stay more than a single day, even if he offers to pay extra. Why do people fear Protokiev's presence? Here's what he had to say in the matter.

"I am death. Or at least this what people see when they stare at me and my minions. These skeletons, ghouls and flesh golems were people once. They were somebody's great grandfather or a tragic lover. But it's more than that. The visage of the dead walking among us would be enough for me to be hated and feared, but when they see me as just another bloke, that's when the real panic starts. I am no lich. I ain't no villain. I'm just a guy. Who likes Oranges and perhaps some poetry reading after a long week of adventuring. The ones that see me as a regular person who not only does not fear death, but openly advocates for the use of necromancy on the protection of people are the ones who dismiss me. They see me as a bond to death. To the end. And having to talk to me is to confront said death in the eye. Not everybody is comfortable with that. I learned on my years as adventuring that being a Necromancer is a lonely life. But it's the life I got."

Alekzander drifts from town to town, fighting Orcs, dragons and all sorts of threats and instead of the love most adventurers receive from the crowds, all he gets is fear. He made peace with that. Here's hoping he can find some solace and happiness as the years roll by. 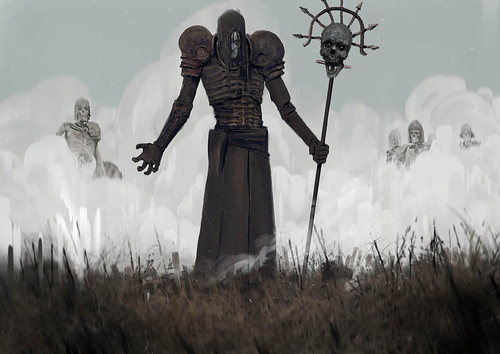