The Aerith* shuttle have been completed in August 3rd 2025 . The Aerith is a totally modulable shuttle , from the inside to the outside .

-The base concept is that the shuttle works as a printed circuit board , all the onboard equipments such as navigation pannels , life support , etc.. are modules that are implemented separately . This design , though costly , was made in order to reduce the technological gap between the production start and finish . Thus the shuttle benefit from the lastest technology available and can be upgraded in the futur too.

-Aerith's is able to swap it's rear module for other modules , such as the space station Kõpu 's one . All modules , from the space station 's ones to Aerith very own modules, are standardized under the ESEP chart , and interconnectable .Thus its is possible to attach 2 Kõpu's module on the back of Aerith for exemple , or even connect the whole space station.
( Under the ESEP chart , all modules must be maneuverable autonomously )
The main reactor module is mainly used for atmospheric reentry .

Here is Aerith after it's first athmospheric reentry test , being removed it's propulsion module .


* A public poll has been conducted to find the shuttle's name , the name that come the most out of it would be the chosen one ( though the final decision would be taken by the ESEP ) . Religious , blasphematory names were of course prohibited . A group of internauts from a social plateform call "reddit" launched a propaganda operation to name the shuttle Aerith, after a famous video game character from the 90's . They finally had the most vote by a large margin . 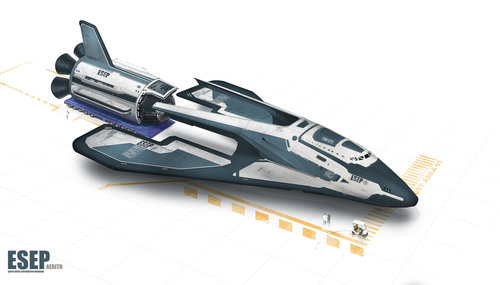