From the feral plains of Faraldia hails the noble and regal Rasharos of the Catfolk that claimed the plains as their own. However, Rasharos doesn't dress up with the skins of his fallen foes and actually speaks perfectly well Common, the tongue of the citizens of Irolatreia the place where he is most active as adventurers. How does one of the savage Catfolk becomes a revered and civilized figure in the adventuring world? Rasharos tells us a bit about his origins.

"The sun is a good teacher, but not a kind teacher. Under his watchful gaze I witness the bloodlust of the Gnoll, killing my family without any remorse. I tried escaping, hiding from them, but the sun would reveal my hiding place each time. I cursed the king of the sky at the time, but it was on my darkest moment where a shinning emmisary of human lands came through. His silver armor reflected the sun in each of it's plates. It's a sight I hold dear over my heart even today. The human defeated the invasion of the gnoll single handlely and then left without even whispering. That human had saved me, yet he didn't even wait for my thanks. His all encompassing light touched me, no more words needed to be said. When I became and adult and the time to assume my role in the Catfolk society came, I decided I would be a bridge between our very different worlds. I became a emmissary for the Golden Emblem city in favor of the Catfolk, there I dedicated my time into worshiping the sun and it's righteous yet cruel justice, wearing a silver armor like my hero used to. Before I knew, I was embarking into dungeon delves and all short of adventures in memory of the nameless man who saved my village."

We then asked why did he dedicate his life to foreigner customs. He replied:

"I wasn't supposed to survive. My life as it exists today is due that one human and his strange ways. I too became a champion of the sun so I can touch others with my actions as well."

Rasharos really dedicated his entire adult life to upholding his own view of justice throught the realms, but we didn't know it had such twist. Let's hope the orphan finds solace under his duties. 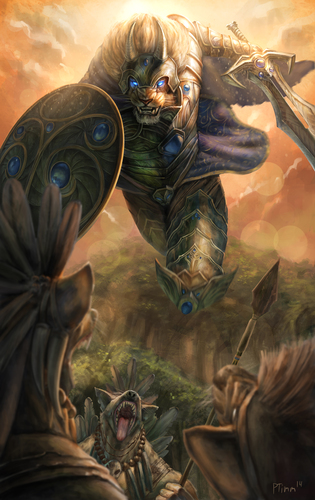