The planet of Obsidia is much similar to our own.
There, nations are charted through violence.
The different and competing religions fight for the very soul of the Obsidians.
But there is a small detail. A detail that would make Obsidia a planet very different from Earth.

The Gods of Obsidia are alive. And they live in the planet. Each nation of Obsidia has one "God".

Orgun was nervous. This was the first time he was allowed into the most sacred ceremony of Ouja, the nation that was birthed from Ouh, the living god. Next to him, his mentors, Oskar and Oswauld. Both are high ranking priests of the church of Ouh.

"Did you bring the tribute?"

Oskar question the young Orgun. His onyx-like skin hidden by the hood he was wearing.

"Yes my master. I did as you have ordered."

Orgun takes out from his backpack a glowing blood red stone. It pulsates in a similar manner of a human heart.

Oswauld speaks non-chalantly. He tries his best to not look up.
Orgun glances at the stone for a moment, but then he looks up. He sees a titan made of charcoal, a massive being with no mouth and two huge orbs. The mountain-like being glances towards the three, as if he acknowledges their presence.

They are in the view of Ouh, the god of the Eclipse.

Orgun was shaking, he places the offer in the altar in front of him. He kneels down. Oskar then starts his plea.

"Oh great Ouh! Heed the call of your people! We demand solace from our enemies! Free us from this horrible war!"

Ouh at first doesn't react. He keep staring at the young Orgun. as if he was thinking. Despite all his power, all his omniscience he was hesitant.

Like a whisper, these words were projected into the priest's mind.
They feel a warm sensation in their heart as they drop to their knees. Their bodies are consumed by a white flame.

Young Orgun and his masters were no more. They received a mercy killing from their God.
An escape from that horrible war. 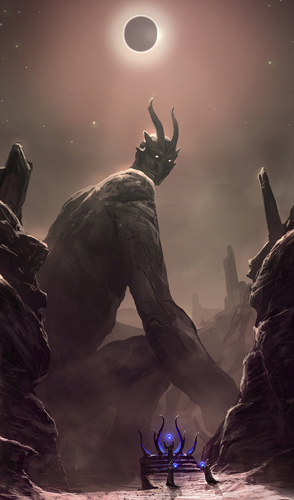 Every solar eclipse, a handful of cultists from an alien civilization make an offering to a living god.